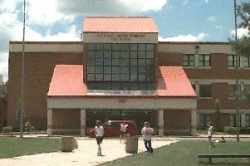 But, we’ve come a long way since the days of tenth grade. Of course, we were the class, that turned it around.

In June 2002, it won its first award in National Scholastic Championship at George Washington University. Richard Montgomery High School was awarded the Blue Ribbon in Education Award by the United States Department of Education.

In 2003, Jay Mathews from Newsweek, identified RM as the number one school in the D.C. metropolitan area in the Challenge Index for Rigor.

Currently 1,924 students are enrolled and approximately 14.9% of the student body is eligible for free/reduced lunches.

Richard Montgomery's Quizbowl team (It’s Academic) is one of the finest in the nation, and has won numerous awards and honors, including a victory at the National Scholastics Championship in 2002.  As of 2006, they are the highest ranked team in the state of Maryland and the Maryland state quizbowl champions. In 2006, they won the NAQT High School National Championship Tournament, defeating State College Area High School in the final at Chicago.

Performing Arts have helped distinguish Richard Montgomery as an advocate for arts funding in public schools as the musicals, plays, chorus and school band are continually used as note-worthy examples of success. The Black Maskers (RMHS Drama Program) were the first high school theater group to attain the rights to perform the musical, Ragtime.

“The Tide,”  is one of very few schools in the entire state which has not only its own student newspaper, "The Tide" but also its own student literary magazine "Fine Lines".

RM Sports is noted for its track, swimming, basketball, tennis, and soccer teams.

The new building in late 2007.  A very different look!  The new front of the building faces Fleet Street (the old football field side).